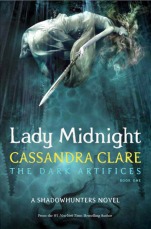 to read a Cassandra Clare book, and this one did not disappoint! Cassie’s writing has improved soo much. 😍 I was highlighting and annotating every other page because there were so many great quotes and moments of foreshadowing I wanted to remember.

Lady Midnight is the first book of The Dark Artifices series, the sequel series to The Mortal Instruments. This book is definitely the strongest first book Cassie has written. It’s much more sophisticated than City of Bones, and the Shadowhunter world is better developed than in Clockwork Angel.

Spoiler-Free Summary: Emma Carstairs is a warrior, a Shadowhunter, and the best in her generation. She lives for battle. Shoulder to shoulder with her parabatai, Julian Blackthorn, she patrols the streets of Los Angeles, where vampires party on the Sunset Strip, and faeries—the most powerful of supernatural creatures—teeter on the edge of open war with Shadowhunters. When the bodies of humans and faeries turn up murdered in the same way Emma’s parents were when she was a child, an uneasy alliance is formed. This is Emma’s chance for revenge—and Julian’s chance to get back his brother Mark, who is being held prisoner by the faerie Courts. All Emma, Mark, and Julian have to do is solve the murders within two weeks…and before the murderer targets them.

I really love how Cassandra Clare intertwines her books together. We witnessed the Blackthorn family being torn apart in City of Heavenly Fire, and now, we see how they have grown past their scars and how they’re reunited with Mark. I love how side characters in previous books now have their own story, but the heroes of TMI and TID stop by every now and then for some action and advice.

I give this book 5/5 stars. 🌟There wasn’t a dull moment at all. I never felt bored or wanted to stop reading–I was completely engaged the entire time.

Emma is so wonderfully sarcastic and witty. 😂 I would’ve thought she was a Heronadle instead of a Carstairs. I love how she has the best commentary. She’s incredibly bad a** she, yet at the same time, she’s still very loving and kindhearted. (eg. Emma getting whipped in place of Mark and Julian.) She’s the breath of fresh air in this series as Will is in The Infernal Devices and Jace is in The Mortal Instruments.

Cristina: “Remember: The Law is hard, but it is the Law.”

Emma: I thought it was ‘the Law is annoying, but it is also flexible.'”

While Emma is a breath of fresh of air, Julian is the rock that keeps her grounded. At the age of 12, he essentially took on the role of a father for his siblings and the Head of the Los Angeles Institute. His character is so incredibly complex–we understand that he’s viewed as gentle, but for his family, he is ruthless and would do anything for them. Julian is the definition of: “Looks like a cinnamon roll but could actually kill you.”

love how the Blackthorn family was such an integral part of this book. 💕 Role Call: Helen, Mark, Julian, Livvy, Ty, Dru, Tavvy (and Emma)! It was so great to see such an amazing family dynamic and how the younger siblings were involved in the investigation. Also, Tavvy is so cute! Can you just imagine a six-year-old kid sitting in a bag of powdered sugar?

The Blackthorn family motto slays me. Lex Malla, Lex Nulla: A Bad law is No Law. Could you imagine if we applied that in our real world governments today? They are such a rebel family. No wonder Emma fits in with them perfectly.

Mark, Julian’s older brother who was taken by the faeries during the Dark War, is returned to the family on the condition that they solve the murders. Since he has spent ~5 years of his life separated from them, he doesn’t know how to interact with his siblings. In fact, since he only interacted with those of the Hunt, he barely knows how to interact with other humans. He’s eventually torn between choosing Kieran, his love and only friend in the Hunt, and his family. 💔 When Kieran sees Mark and Christina together, he feels betrayed and calls the Hunt. This leads to the whole dilemma of Mark being whipped but Julian taking his place, but Julian is in so much pain that Emma knocks him out and takes his place.

Christina is such a good friend. 😍 I really wish she could’ve joined the gang earlier on so that she and Emma could have been parabatai. I was really curious about her character because she doesn’t reveal much about her past (same as Diana). The only thing we knew was Perfect Diego. Then, (of course) Diego shows up as a centurion for the Scholomance which is essentially the Shadowhunter version of an undercover FBI agent to work on the case. We learn that Diego’s brother and Christina’s then-best friend, Jamie, had plotted to become Christina’s parabatai so that his family could take over the Institute in Mexico. Christina found out, so she fled to the LA Institute. Diego returns because he disagrees with his brother and loves Christina, creating a bigger mess in the Mark-Kieran-Christina-Diego love quadrangle.

Malcolm Fade. AKA the reason I have trust issues. I was so sad to find out he was the villain. He was supposed to be one of the good guys! He’s Magnus and Tessa’s friend! He helped out Julian by providing medicine to Uncle Arthur!! He had been protecting the Blackthorns…or so we thought.

“I can burn you to the ground in six seconds flat and use the ashes to stuff a teddy bear for my girlfriend. Not that I have a girlfriend at the moment, but one lives in hope.”

In reality, Malcolm hates the Blackthorn family because they killed his love, Annabel, hundreds of years ago. To be fair, he did drop some mad hints that he was the bad guy. He always talked about the importance of love and how he would bring back love from the dead. He also never really helped with the investigation. It’s pretty insane how far he was willing to go for love: creating a cult, murdering dozens of people, and willing to sacrifice six-year-old Tavvy.

Reading about Julian and Emma’s love for each other really touched my heart. ❤Their feelings of longing for each other were just so deep and true. It just made me feel #foreveralone. (Side Note: What is it with Cassandra Clare’s characters and having sex at the worst possible times? Clary and Jace in a cave, potentially exposed to hundreds of demons. Tessa and Will in Mortmain’s prison. Finally, Emma and Julian on the beach only a few feet away from the Los Angeles Institute. YOU GUYS ARE GOING TO GET CAUGHT.)

As readers, we know Julian and Emma have a strong, intimate love because of the power it extends to their physical abilities. Julian coughed up seawater when Emma was drowning. Emma felt the pain across her back when Julian was whipped. Emma healed Julian of an uncurable poison with a rune. Their bond is different from the bonds of all other parabatai because they truly love each other.

It was interesting to learn the differences between types of love. The Greeks had four types: agape, philia, storge, and eros. Agape describes the love that man has for God. Philia is the love of friends, and storge is the love that parents have for their children. Meanwhile, eros means intimate love. Eros, also known as Cupid, is the son of Aphrodite and the Greek god of sexual attraction. Shadowhunter law forbids the love of eros between parabatai which, of course, is what Emma and Julian have.

The book ends with Emma seeing herself in an “I must break Julian’s heart to protect him” situation so she asks Mark to pretend to be in love. Mark goes “Why pretend?” and they go into his room. This just adds two more people to the love quadrangle, creating a love hexagon. Oh yea, and Annabel is alive, too. ASDFGHJKL.

I feel like every Shadowhunter struggles with confronting their emotions. There’s this scene where Emma imagines locking away unwanted emotions in a box. Because that’s very healthy. But #SAME. Julian is described to do something along similar lines.

At the end of the book, Christina and Diana each say a quote that really struck a chord with me were:

I N T E R E S T I N G. 🤔 In the next book, we’ll be dealing with the love hexagon, more of the Blackthorn siblings, and, of course, the whole Malcolm-raising-a-loved-one-from-the-dead situation. I’ll be reading Lord of Shadows on the plane back to LA, so hopefully, I’ll have that book discussion done sometime over the weekend. Thanks for reading 😀 Have you finished Lady Midnight? What were your thoughts??

HAVE YOU READ Lady Midnight? WHAT WERE YOUR THOUGHTS? LET ME KNOW IN THE COMMENTS! 💕