Guys…This book was seriously SO FREAKING GOOD!! ❤ 💙 It’s been such a long time since I’ve read a book where I felt that I had my entire mind, body, and soul invested in the characters and plot. I’m so glad that I’ve finally picked up this book because it’s definitely one of my favorite reads in 2018.

TO KILL A KINGDOM by Alexandra Christo 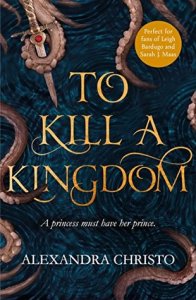 PUBLISHED BY Macmillan on March 6th, 2018

Princess Lira is siren royalty and the most lethal of them all. With the hearts of seventeen princes in her collection, she is revered across the sea. Until a twist of fate forces her to kill one of her own. To punish her daughter, the Sea Queen transforms Lira into the one thing they loathe most—a human. Robbed of her song, Lira has until the winter solstice to deliver Prince Elian’s heart to the Sea Queen or remain a human forever.

The ocean is the only place Prince Elian calls home, even though he is heir to the most powerful kingdom in the world. Hunting sirens is more than an unsavory hobby—it’s his calling. When he rescues a drowning woman in the ocean, she’s more than what she appears. She promises to help him find the key to destroying all of sirenkind for good—But can he trust her? And just how many deals will Elian have to barter to eliminate mankind’s greatest enemy

To Kill a Kingdom is essentially a dark retelling of The Little Mermaid but 10000x better. Instead of the happy-go-lucky (and slightly ditsy) Ariel from the Disney version, we have Lira, the most feared Siren across all kingdoms, notoriously titled The Prince’s Bane. 🧜‍♀️ After she upsets her mother, the Sea Queen and basically the evil w(b)itch in this story, she’s cursed to become a human and instructed to steal the heart of Prince Elian…who’s not-so-coincidentally a Siren hunter. DUN DUN DUN!! If you’re a fan of the enemies-to-lovers trope, you will EAT. THIS. UP. If you like pirates, adventure, and badass characters, this is the book for you!

Alexandra Christo’s writing is phenomenal—it’s so easy to get into the story. It flows extremely well, and you’ll be hooked from the first page. 📖 Each time I told myself that I would stop after one more chapter, but it was too easy to continuously read until I was finished with the whole book. For a 350-page book, there’s not a whole ton of world-building, but it’s an appropriate amount where it’s well-balanced with the whole story.

“In my heart, I’m as wild as the ocean that raised me.”

Truthfully, I wish the book were a bit longer because there was so much more I wish that had been explored. I honestly think this book could’ve used around 100 more pages to wrap everything up more cleanly because the most climatic battle scene occurs in the last 50 pages. While it was still written very brilliantly and vividly, I would’ve enjoyed seeing the aftermath, so an epilogue would have been the perfect little bow on top of this gift of a novel. 🎁

Lira goes through so much growth as a character. ✨ Although she grew up as the princess of the sea, her upbringing wasn’t easy because her mother, the Sea Queen, relentlessly made her feel unworthy and basically manipulated her into becoming the fearsome killer that she is. As she journeys with the Prince, she starts to question her own upbringing and reflect on the possibility of a world where there is peace between the two races.

Prince Elian is seriously so swoon-worthy. 💘 He somehow strikes the perfect balance between a sexy badass and soft cinnamon roll. He’s the Prince Charming we know and love from the classic Disney (and maybe even Barbie) movies but ~with a personality~. Even the side characters are funny and likable. I wish that we had a chance to learn more about their backstories, but since this is a standalone novel, I can understand why the author decided to gloss over it.

“How strange that instead of taking his heart, I’m hoping he takes mine.”

Even though this is a loose retelling of The Little Mermaid, the plot still manages to remain completely unique and creative, albeit a lot darker. 🌊 There’s much more adventure, and the story is overall very moving, especially as we see each character confront what they want their future to be.

I would highly recommend this book to everyone. It’s fun, adventurous, and an all-around good time. 🌟 WHAT ARE YOU DOING?? GO PICK IT UP! (please)

Have you read To Kill a Kingdom? What were your thoughts? Let me know in the comments! 💕

26 thoughts on “Book Review: To Kill a Kingdom by Alexandra Christo”